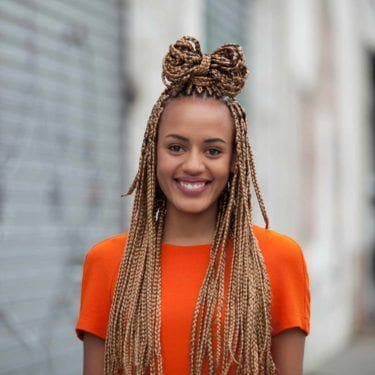 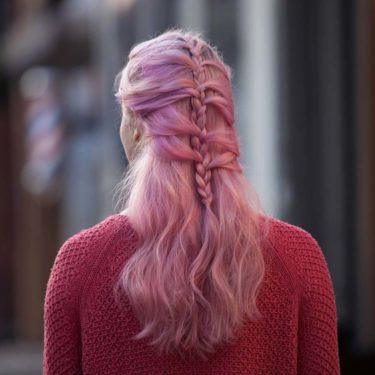 Hair accessories may have dominated the game in years past, but nowadays, hair braiding has become the new classic way to spiff up most of our everyday hairstyles.

The sheer amount of looks that can be achieved simply by braids is enough to make your head spin. Which is why, like all enabling hair editors worth their salt, we’ve decided to give a rundown of the top techniques that form the basis of all other braided hairstyles. Call it your guide to how to do braids or an official start-of-summer gift as we catalog one of its hottest trends and reference it for years to come. Hopefully this is one style that stays in the rotation, regardless of the weather:

How to Braid: A Glossary of the Most Popular Braids and Techniques

When you search for ‘how to do a braid’ one of the basics you have to master is the regular three-strand braid. It involves sectioning hair into three parts, then alternately crisscrossing the left and right sections over the middle section until you reach the end. Sounds complex in theory, but trust us: Once you get the hang of it, your muscle memory will take over in a snap. Want some help keeping it together? We also like to keep things in place with an everyday-hold hairspray, like TRESemmé Compressed Micro Mist Hairspray Texture Hold Level 1. 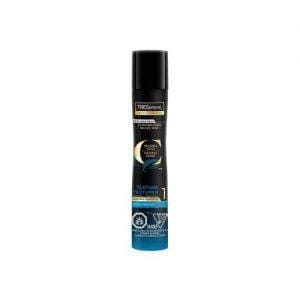 The French braid is simply a built-in, regular three-strand braid—which means that it starts at your scalp instead of just freestanding on a loose ponytail. The same technique applies, only this time hair is pinched from either side of the head and incorporated into the main weave as you move downwards. This anchors the braid onto your scalp, as well as creates that nice, satisfying pattern (Done horizontally across ear-to-ear, it results in a crown braid or “headband” braid.). As with most things French, this method is a chic and practical take on the look. Takes practice since you’ll be braiding the back of your head—a.k.a. blind-braiding—for a bit, so click on our French braid tutorial if you’re still all thumbs.

The Dutch braid is a French braid, but with the side sections crossed under the middle section. This makes the weave raise and bump up in the center of your head, lending it the moniker “banana braids.” Note: They’re also known as the “reverse French,” boxer braids (because they’re so snug, athletes love ’em) and yup, cornrows. Worn as pigtails—“Double Dutches”—these braids have gained a spike in popularity because of social media and Hollywood celebs showing off this look’s ’90s hair appeal.

Not to be confused with the “reverse French” or Dutch braids, the upside-down braid gets its name because it starts at your neck and goes upwards, ending at your crown (*drops mic*). Before you think this is damn near impossible, it’s actually quite easy: Just flip your head over and start French/Dutch braiding at your neckline, tying the ends in a really cool top knot or high pony. Looks awesome in pictures! Ed’s note: A texturizing spray, like Catwalk by TIGI Texturising Sea Salt Spray, helps give locks a more tousled texture that results in more grip and traction, both helpful for any gravity-defying look.

The fishtail braid is one of the few braids to not use three sections or even use the regular three-strand as basis, which makes it tricky for some to learn (but we love it so much, we’ve basically done every fishtail tutorial ever <3). It’s done by splitting hair in half, then pinching a thin strip from the outside of one section and crossing it over to the other. This alternate passing-over of sections will eventually result in a neat herringbone pattern on your hair, which, if you want extra style points, should be pancaked or gently tugged apart for more texture.

Delightfully quirky, a waterfall braid is a horizontal French braid with the underside left open, creating a pretty “falling-over-a-cliff” effect. This means that instead of a linked chain where sections are usually woven from root to tip, new hair from the hairline is incorporated with each criss-cross. Done on the bang area, it’s the top side of the braid that gets fed with new sections as you go along. Check out our waterfall braid tutorial to help you master this look. A shine spray, such as Bed Head by TIGI Headrush Shine Hairspray, helps impart a pretty sheen—a.k.a. the perfect final touch. 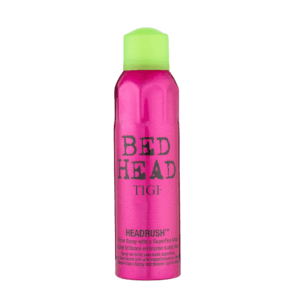 Though they do come with fishtails, the references end there—if anything, the mermaid braid is actually just a lazy way of French braiding hair. Less “anchored” onto your scalp, it starts as a normal French, then switches to a regular three-strand for maybe three chain links, then incorporates some hair again as you go down. The name comes from the big fishtail pattern you create as you pinch hair from the sides, which does make quite a splash. Check out our mermaid braid how-to for more tips.

The milkmaid braid is a look achieved by crossing two regular three-strand braid pigtails across your crown, headband style. This fun, folksy look works best with a middle part and perhaps some bobby pins, to affix each braid onto each other and behind the opposite ear.

This angelic iteration is fast becoming the go-to look for graduations and weddings, as the style leaves room for hats or hair accessories without getting all smushed up. A halo braid is a French braid that goes around the circumference of your head—from part line to nape to back up again—and then switches to a regular three-strand as its pinned. The overall look should be a braid that circles your whole head, kind of like, you guessed it, a halo. Looks equally pretty on both good and bad girls though. Click on our halo braid tutorial for a step-by-step.

Repeat after us: over, under, over—keep that in mind as you create your four-strand braid, which obviously, can seem like one strand too many as far as braiding hair goes. To start, divide hair into four sections; our four-strand tutorial actually numbers them, with 1 and 4 being the outermost sections. Next, cross section 1 over section 2, then under 3, and over 4, then tighten. Repeat the process using the outermost section for each weave, and braid until the ends. Pancake for texture, and enjoy the unique look of this plait that quite literally had your hands full. 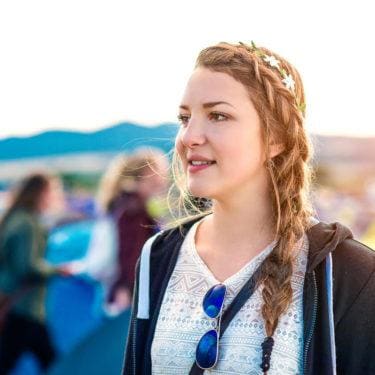 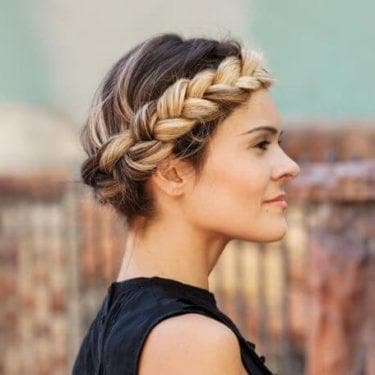 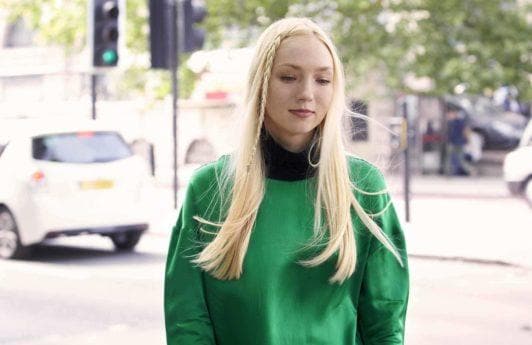 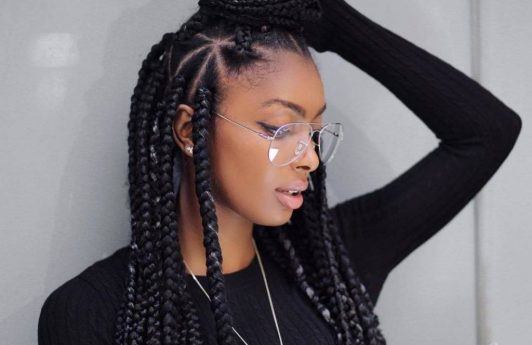 How to Create Box Braids On Natural Hair (+26 Inspirational Looks!) 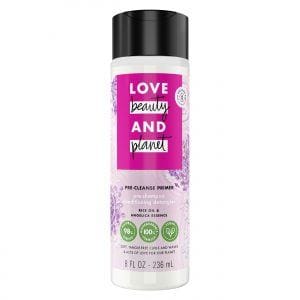 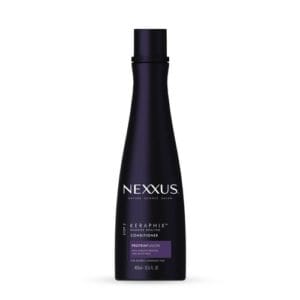 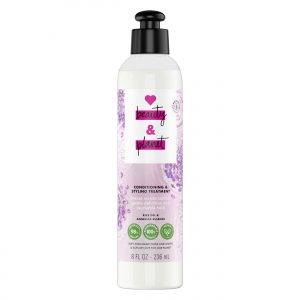 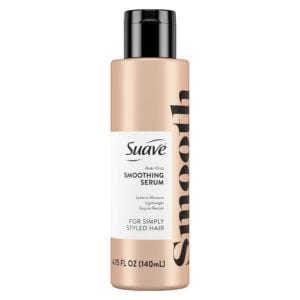 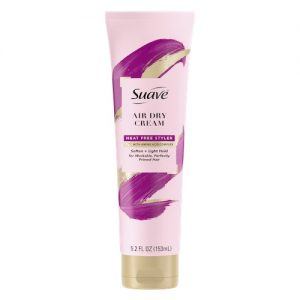 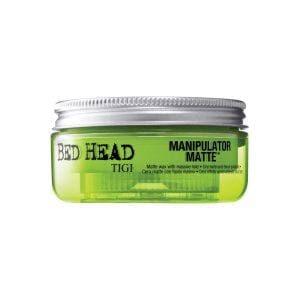 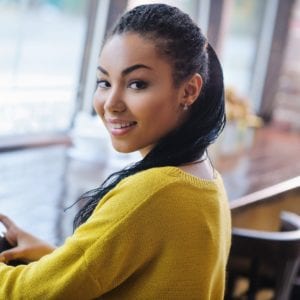 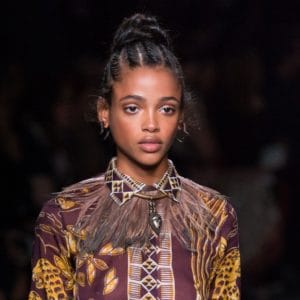 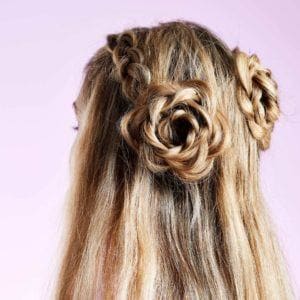 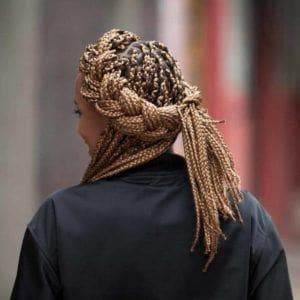 Halo Braid with Box Braids: 3 Stylish and Simple Ways to Get The Look 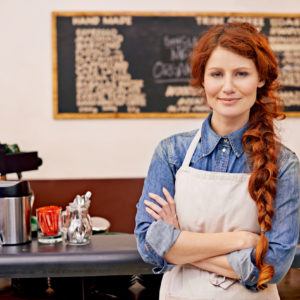 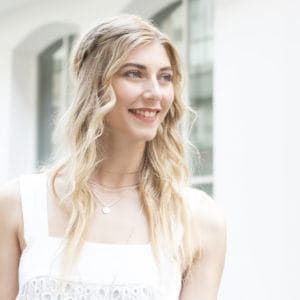 How to Create a Chic, Half-Up Braided Style 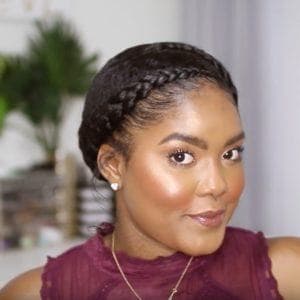 Style It On: Braided Prom Updo with Mini Marley 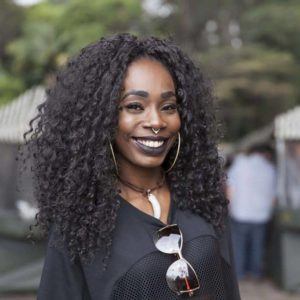 Why the Crochet Braids Technique is a Protective Hairstyle Favorite 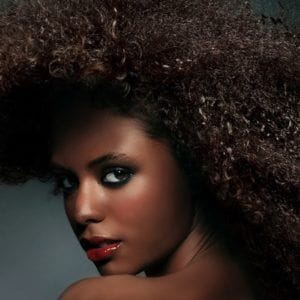 Natural Hair Tips: Caring for the Crochet Twist and Other Protective Styles with Daven Mayeda 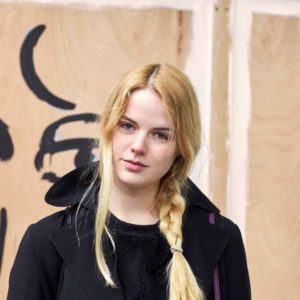 Side Braids: 8 Ways to Wear this Trend